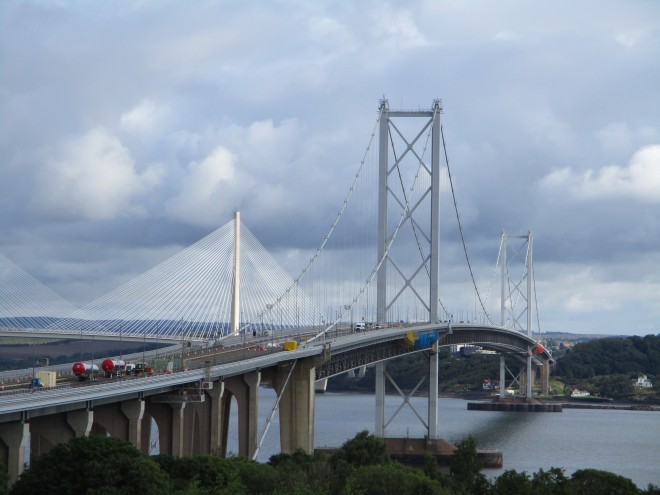 Posted on August 2, 2020 by jfaraday Posted in Uncategorized

At the heart of Simon’s second story, Slough Dog, is the story of a ghost dog, which workers on a building site believe has killed a man.

In the story, an ancestor of the building site owner attempted to throw the family doginto the Firth during a storm. The result was a generations-long curse on the family.

This is the pier that appears in the story. It’s near Queensferry Crossing, which sits on the border of Lothian and Fife.

The inspiration for that part of Slough Dog came from a trip we made to Inchcolm Island. The island itself is a fantastic day trip, if you’re ever in the area. However, the water can be impressively choppy. It was easy to imagine slipping and sliding along the rocks, attempting to keep one’s feet and not be pulled into the water by a gigantic wave.

There are three bridges over the Firth of Forth at Queensferry Crossing. The first, the Forth Rail Bridge, opened in 1890. It’s a cantilevered bridge, and it’s still in operation, carrying 200 trains per day and as many as three million passengers per year.

The Forth Rail Bridge is a World Heritage site, and a much beloved symbol of Scotland.

In 1964, Scotland built the Forth Road Bridge, for auto traffic. This is a suspension bridge. It was the first of its kind in the UK, and the longest such bridge outside of the US. So popular was this bridge that it had exceeded its capacity by 2017.

Today, the Forth Road Bridge operates as a world class cycling and foot bridge, with limited access for busses and taxis. It will also carry the planned Stagecoach Fife, a fleet of driverless vehicles carrying passengers between Lothian and Fife.

The third Forth bridge (see what I did there?) opened in 2018. This bridge set records from the get-go, including:

It’s also incredibly pretty when the sun shines on the cables.

Simon Pearce landed in Edinburgh before any of the bridges were built over the Forth. The busy residential and commercial area surrounding Queensferry Crossing would have looked quite different.

However, if you’re wandering around the city on a foggy twilit evening, you might just see a big black dog out of the corner of your eye.

If you’d like to read more about Simon’s adventures, check out his first volume, Shadow of Justice, available now from all of your favorite booksellers.