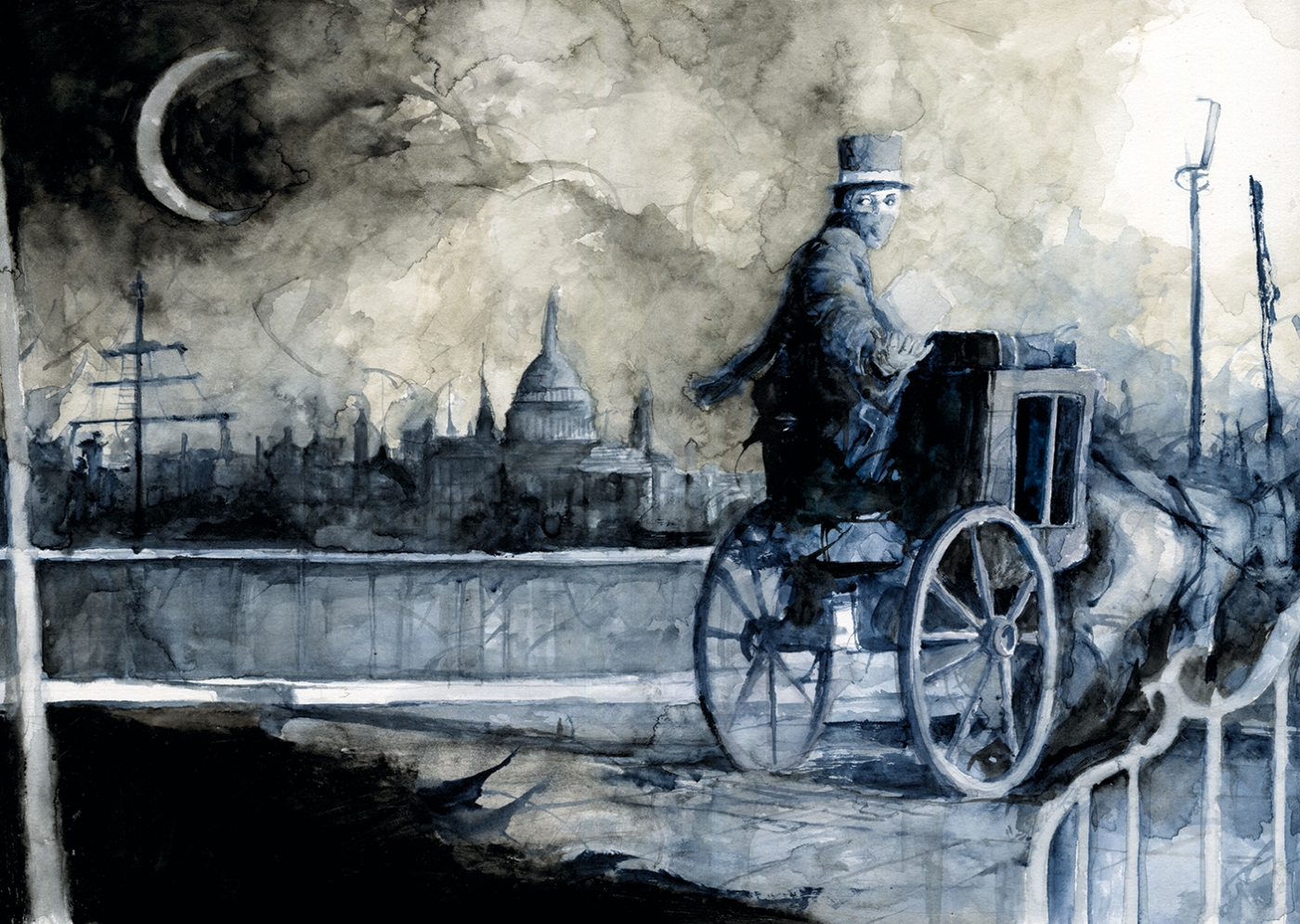 An Interview with Toby Virgo

Recently I had the pleasure of taking the Real Sherlock Holmes walking tour of Edinburgh. If you didn’t know, Edinburgh was Arthur Conan Doyle’s hometown. He lived not far from the town centre, and there’s a plaque at the University of Edinburgh medical school honouring him as the doctor for which he wanted to be remembered.

I’ve always enjoyed the Holmes stories, but the tour gave me a deeper appreciation for Conan Doyle himself. If you’d like to know more, I can recommend Dangerous Work, Conan Doyle’s diary from his time as a ship’s surgeon on an arctic vessel, as well as The Doyle Diary, which focusses on ACD’s father, Charles Altamont Doyle, who illustrated many of the original ACD stories.

But back to the point of this post. Toby Virgo, the knowledgeable and entertaining face behind the Real Sherlock Holmes Walking Tour of Edinburgh has written a work of historical fiction, and it promises to be a cracking good read.

The book, Carter the Cabman, is available in two formats: a lushly illustrated deluxe hardbound edition with artwork by the renowned Daniele Serra, and a Kindle edition. More on this in a bit.

The author has graciously agreed to an interview, so without further delay…

Your book in five words or less. Go!

The protagonist of your upcoming book, Carter the Cabman, is a cab driver in London in the 1880s. How did you come up with the idea for this character?

I’ve wanted to write a story set in Victorian Britain for many years and have actually started and discarded a few but couldn’t quite hit upon an idea I was truly happy with. I realized I didn’t have a strong enough central character or indeed a sufficiently compelling plot.

Then, in August 2017, I was preparing to go for a week’s holiday in Dartmoor, England, and in preparation for my trip decided to read for the umpteenth time one of my favourite ever books: The Hound of The Baskervilles by Sir Arthur Conan Doyle – as you know, a Sherlock Holmes story that is largely set in that wild, beautiful and windswept place in Devon.

There is a very famous passage in the story where Sherlock Holmes and Dr Watson are walking along Regent Street in London and Holmes suddenly sees that his client, Sir Henry Baskerville, who is a little way ahead of them, is being followed by a man in a hansom cab. Before Holmes can do anything further about it, however, the passenger in the cab realizes that he has been spotted and calls up to the cab driver who quickly speeds off into the busy traffic leaving Holmes and Watson in his wake.

The great detective, though, is not so easily thwarted and has taken note of the cab number, explaining to Watson that whoever was in the cab (though extremely cunning) had put himself at one great disadvantage: ‘He had put himself in the power of the cabman.’

I must have read this passage dozens of times before without it really registering but in that moment I knew that I finally had the central character and (quite literally) the vehicle I had been looking for: a man whose job would naturally take him all around London and who would hear and see all in his rounds of the unforgiving city.

That is fascinating! So, tell us a bit about your cabman, Jeremiah Carter. What makes him tick?

On the face of it Jeremiah Carter is a straightforward and commonplace enough character: a cab driver who works at night in Victorian London (bear in mind that in the year 1888 when the story is set, there were an estimated 15,000 hansom cab drivers working in the capital).

As the story unfolds, however, it soon becomes clear that Carter is a far from ordinary man – indeed, he is clearly a man on a mission, driven in equal measure by some kind of great personal loss he has suffered and a new-found desire to bring the Word of God to the streets of His downtrodden people. As the book unfolds and he shares his story, we learn what that mission may be – and indeed, the exact truth of his own terrible tragedy.

Carter sounds very compelling. From the title, one might expect that his occupation is crucial to the story. Is it? Can you elaborate on that?

It certainly is. Carter works as a cab driver covering the hated ‘curfew shift’ – as the book says: ‘from the Kings Road to within the sound of St-Mary-le-Bow, starting daily at sundown and refusing no fare until dawn’.

The whole backdrop to the story is that he is doing this during the infamous Autumn of Terror in 1888, when London is reeling from a series of horrific murders that would later be known as the Jack-the-Ripper killings. As such, Carter encounters the full spectrum of humanity, from the Good and the Great to the waifs and strays of the greatest city on Earth, navigating the highways and byways of a fog-gripped city that is also a powder-keg ready to explode, all the while musing on the state of Christian civilization, the deeper meaning of these murders…and indeed, who could be responsible.

How would you characterize the story in terms of genre?

I would say that ‘Carter the Cabman’ straddles a few genres: a Victorian gothic thriller that is also part historical fantasy and part magical realism.

I first heard about your book, then in progress, in the course of your truly excellent Real Sherlock Holmes Walking Tour of Edinburgh. I can’t help seeing similarities between leading people around the city on foot, and doing so in a cab.

Did giving historical walking tours have a hand in the development of your character or the story?

As you know, The Real Sherlock Holmes Walking Tour covered quite a large part of Edinburgh, and during every tour without fail I would interact with a whole host of interesting and diverse characters – meaning both people who were taking the tour as well different characters we spontaneously happened to encounter.

This provided me with the ‘feel’ of what it was like to deal with and experience a multitude of fleeting encounters with very different personalities whilst also trying to get on with doing my job.

Just as importantly, though, was the knowledge I had to build up to deliver the tour to a high standard. I read and researched widely around the time period covered by the tour (roughly 1820-1920) so that I could make it as interesting as possible, especially for people who were not particularly interested in Sherlock Holmes but who had maybe been dragged along by a partner!

What was really valuable, however, was how much I learned from the people who actually took the took who were often very knowledgeable about the period themselves. I heard all kinds of fascinating things and obscure personal anecdotes, all of which certainly formed the best possible preparation for writing a historical novel, which many people believe is the most difficult literary genre to pull off successfully.

Another question: Why London?

Once I’d had the initial idea about telling the story of a night in the life of a hansom cab driver, it seemed that London was the natural (perhaps only) place to set it.

I also realized that I would probably need something else to really catch people’s attention and really stoke their interest, so setting it during the Autumn of Terror which is something that virtually everyone has heard about and still exercises such fascination, seemed to me a good starting point in widening the book’s commercial appeal without compromising on the story I wanted to tell.

Will we see more from Jeremiah Carter in the future?

Yes. I have plans to write two more ‘Carter’ novels to make a trilogy about the same character, following his journey through London as the times change and he reaches the end of his life.

The second book will be set during the end of the reign of Queen Victoria and the third just before the Great War when the British Empire is collapsing.

I also plan to write some shorter, self-contained ‘Carter’ stories that would be suitable to appear in magazines and other publications, and once I have the time to create it, my own website which will have its own blog.

Are you working on anything new at present?

I have the plots for the second and third ‘Carter’ novels roughly sketched out…so when the dust finally settles on the first I will be starting the second, provisionally titled: ‘Carter the Cabman: Grey Mares’ Tales’

Where can people purchase Carter the Cabman? And what are the available formats?

Currently ‘Carter the Cabman’ is available in two formats:
(1) I have just had 250 limited edition hardback copies of the book printed. These first edition books are fully illustrated by the brilliant Italian artist Daniele Serra, who has provided illustrations for Stephen King and Clive Barker amongst many others. Each copy is signed and numbered and contains illustrations that will not appear in any future edition. This is the version of the book as I originally imagined it.

The hardback book is priced at £20 plus postage and packaging. The easiest way to order a copy is to email me directly, and once an order is received the book can be sent out immediately. I have already sold about a third of these books so these copies are available on a first-come, first served basis, and once they’re gone, they’re gone.

(2) Carter the Cabman (release date: August 31, 2021) is also available as an e-book on Amazon Kindle, with the full text of the book but no illustrations.

In the future I will also make the book available as a paperback, again on Amazon.

And where can readers connect with you and your work?

At the moment, the best place is via the official ‘Carter the Cabman’ Facebook page. Anyone who wishes to contact me directly can also e-mail me.

Thank you so much, Toby, for stopping by, and best of luck with your new release!